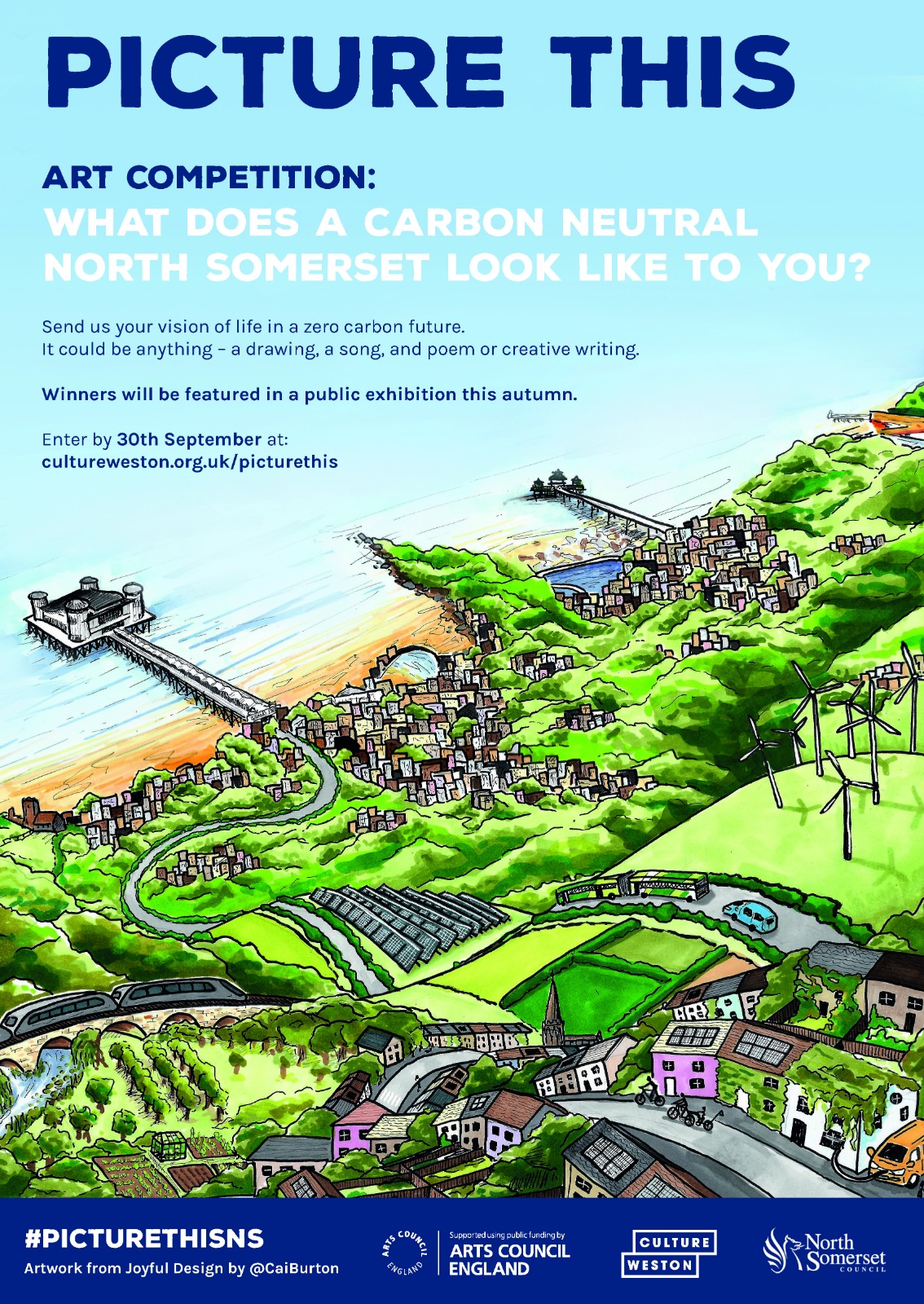 The Picture This art competition invites local people, particularly children and young people, to imagine a carbon neutral future where the worst impacts of climate change have been prevented. The posters feature an artist’s impression of a net zero carbon North Somerset and have been designed by local illustrator Cai Burton.

North Somerset Council is working in partnership with Culture Weston on the Picture This project, which aims to inspire local people and provoke change to make North Somerset carbon neutral by 2030.

In net zero carbon communities, greenhouse gas emissions are reduced as close to zero as possible, with the small amount which remains being removed from the atmosphere, for example through planting trees.

“I’m really excited about the Picture This art competition. We’re inviting local people of all ages to create art which imagines a net zero carbon future for North Somerset. A future where we have adapted to use low carbon technologies and are more resilient to climate change. Visualising a brighter future is so important and we need everyone’s help with this.”

Tom Newman, Programme Manager at Culture Weston, said: “We all know that the old ways of doing things are not working and have not worked. New ideas are vital. We need new ways of thinking and living, to inspire people and provoke change.

“We’re looking for artworks in any creative medium. That could be drawings, poems, songs, creative writing, textiles, film – anything which focuses on what is possible and achievable to address the challenge of climate change and create a better world for our future.”

The Picture This art competition, which is open to all ages, closes on Thursday 30 September. Winners will be chosen based on their creativity and ability to engage people in thinking about a net zero carbon future. The finalists will be displayed in public spaces around North Somerset over the autumn and winter.

For more information including the process for submitting artwork go to cultureweston.org.uk/picturethis

The Picture This project kicked off last month with the council’s music service running a music course in partnership with Bath Philharmonia’s creative learning team. Young people with special educational needs and disabilities who attend mainstream schools in North Somerset created their own music in response to the Picture This brief, and the recordings they made will accompany the Picture This exhibition this autumn.

Culture Weston is a partnership-led initiative that places culture at the heart of Weston-super-Mare’s daily life and future growth. It is led by North Somerset arts organisation Theatre Orchard, in collaboration with North Somerset Council, Arts Council England and the local community.