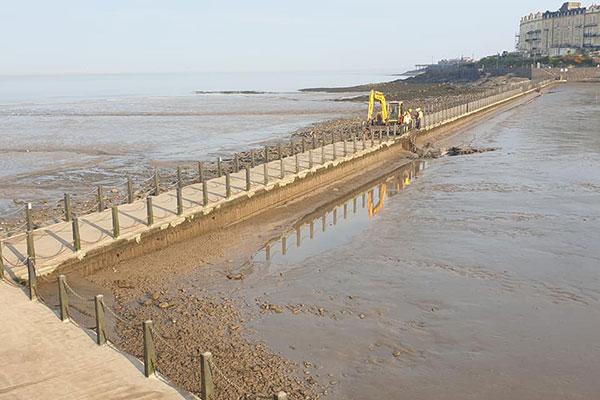 Marine Lake in Weston-super-Mare will reopen for the summer on Saturday 3 July after completion of the first stage of a £300,000 project to improve the popular community facility.

The lake has been closed since April to allow high tides to naturally ‘flush out’ as much of the lake’s compacted silt as possible. Two faulty sluice gates were removed to allow the lake to fully drain and diggers were used to churn up the deep layers of silt alongside the causeway to ensure the high tides had the maximum impact on flushing out remaining silt.

The natural tidal flushing has been completed over nine weeks and the lake and causeway have been temporarily closed to the public to protect their safety.

The lake will now be reopened for the busy summer season with work set to resume in the autumn. New orange and white buoys will be used in the lake to mark changes in water depth due to silt removal.

An application for a licence to mechanically remove around 30,000 tonnes of remaining accumulated silt has been submitted to the government's Marine Management Organisation with an outcome expected in the next few months.

Cllr Mike Solomon, executive member for neighbourhood and community services said: "Marine Lake was created in the 1920s to ensure that swimming was available throughout the day and not just when the tide is in. Over the years the lake has become silted up and is now almost impossible to swim in. We are in the process of changing that in order to give residents and visitors somewhere to swim outdoors – somewhere for serious swimmers and families alike.

"By successfully flushing out around 10 per cent of the silt naturally, and at minimal cost, means that the amount we’ll need to remove mechanically has been considerably reduced. More of the restoration budget can now be spent on refurbishing and enhancing Marine Lake’s facilities to create a real hub for outdoor swimming and other leisure uses."   North Somerset Council’s investment in Weston’s Marine Lake is part of a £700,000 Great Lakes project which will also involve work to revitalise Clevedon and Portishead's coastal lakes.

The council is working closely with newly-established Community Interest Company Weston Marine Lake Mudlarks on the possible long-term maintenance and finance arrangements for the restored Marine Lake. To get involved with Weston Mudlarks go to https://westonmarinelake.co.uk.